Some of you may know that OSEP (the Office of Special Ed Programs) has been investigating TEA (Texas Education Agency) since the Houston Chronicle published the Denied series in 2017.

The Denied series documented how the former Gov. Rick Perry directed the TEA to keep children out of special education by putting an illegal cap on number of students who could qualify for special education in Texas public schools.

So, OSEP came to Texas in 2017 after the Chronicle published their series.  They held hearings around the state, took comments via a website, and audited 12 local school districts.

The investigation concluded that TEA had violated the ChildFind mandate under IDEA (Individuals with Disability Act).  The ChildFind mandate requires the local school districts to locate, identify, and evaluate all children with disabilities—even those in private schools.

In addition to that, OSEP also found that TEA had failed to provide FAPE (free appropriate public education) to these children that they had failed to identify and evaluate.

Then began a long slow dance of OSEP requiring TEA to fix the problems, and TEA responding like a teenager who doesn’t want to take out the trash—dragging their heels, taking their time, and doing a sloppy job of it.

In the meantime, Texas had to return $33 million dollars in special education funding to the feds as a penalty for failing to provide FAPE. 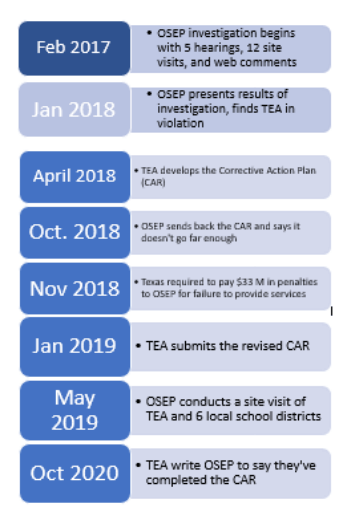 This latest communication from OSEP (on Oct 19, 2020) details the many things that TEA promised they would do but haven’t actually provided proof for.  At least no proof as of May 2019.

Where did TEA make these promises?  In the Corrective Action Plan (CAR) that they wrote in 2018 and expanded at OSEP’s insistence in 2019.

TEA did that.  They promised a lot, and have yet to document that they actually did what they promised to do.

What TEA Promised They Would Do, but Haven’t Done Yet or Can’t Document They’ve Done

TEA has failed to:

At the site visit in May 2019, local educators interviewed by OSEP expressed confusion about how students with dyslexia should be identified and provided with services.

And I must confess, that I was also confused after reading about 80 pages of the TEA Dyslexia Handbook.  There is some contradictory information about the difference between a student receiving dyslexia instruction under 504 or an IEP.  There is also some very confusing information about dysgraphia.

Fixing the Error and Omissions in the TEA Documents

Pages 17-31 of the letter are a list of all the corrections that TEA must make to their Parent Guide to the ARD Process as well as the Dispute Resolution Handbook.

OSEP is sending their revisions to the Procedural Safeguards in a different letter.

So be warned:  those documents:

All have mistakes in them.

If you’ve been given a copy of one of these documents by your local school district, take your copy, and correct it according to the changes in the OSEP letter, beginning on page 17. 20_1019 OSEP response to TEA claim to finish CAR actions

What Does All This Mean To Me?

If you struggled for years to get your child qualified for dyslexia or other special ed services, but the school district refused to take your child out of RTI (response to intervention), request an evaluation.  Your child may be eligible for a lot of compensatory time. Contact the special ed director at your local school district.

Like this and want to read more?  Check out my blog, Tips From the Trenches